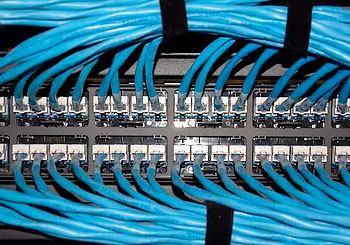 To understand what VLANs do, it’s also very important to know about LAN or Local Area Network.

LAN (Local Area Network) is a data communications system, allowing a certain number of computers to communicate directly with each other within a moderately-sized, physical area over a physical network.

So, in short, a VLAN is a “virtual” LAN, consisting of a assigned devices communicating privately on a larger network. In more technical terms, a VLAN is a unique, broadcast domain created by one or more smart and managed Ethernet switches. Note: Unmanaged switches cannot be used to create VLANs, as they do not have a user interface to facilitate this technology. So it’s always better, for business use, to get a managed Switch (Cisco, Juniper – you name it).

To dive deeper into this topic the main advantages of VLAN are listed below:

Broadcasts are required for the normal function of a network. Almost all protocols and applications depend on broadcast communication to function properly in a network. So, A layer 2-switched network is in one single broadcast domain and the broadcasts can reach the parts of the network that broadcast can reach. A layer 3 device, also called a Router, is used to segment a broadcast domain. This means that a router basically “shows the way” for traffic to which VLAN the traffic should be assigned/reaching.

Lets say we have a lot of traffic. If we segment a large LAN into smaller VLANs we can significantly reduce broadcast traffic as each broadcast will be sent on to the relevant VLAN only. This will cause a reduced MEM/CPU load on your router(s).

VLANs provide better network security. In a seperate VLAN environment, where you have control over each port and user. An abusive user can no longer just plug their server or PC into any switch port and sniff the network traffic using a packet sniffer (which means they could see ALL traffic). With a VLAN the network administrator (or the company that manages this for you) controls each port and whatever resources it is allowed to use.

VLANs help to restrict sensitive traffic originating from any server in that VLAN.

Splitting up a large VLAN to smaller VLANs is cheaper than creating a routed network with routers because normally routers are far costlier than switches.

https://www.hostslim.eu/ offers a wide range of hosting servers. We have our own Datacenter in The Netherlands.